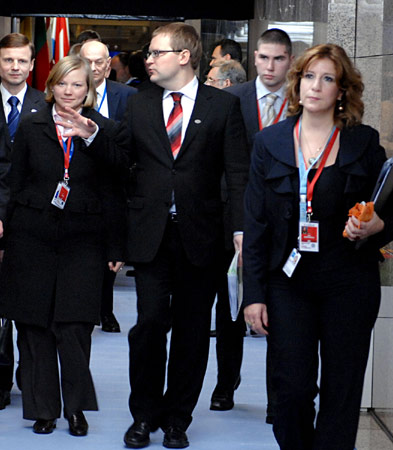 Despite several legislative moves toward improving gender equality, women and men still do not hold equal status at all levels of society.

Estonia has a long history of being a nearly classless society. However, respect for age, position, and experience fosters a hierarchy of kinds within the culture. Despite several legislative moves by the government toward improving gender equality, women and men still do not hold equal status at all levels of society. Women are integrated into most areas of public and private life, although their inclusion in the political arena is extremely limited compared to that of men. The gap in the rate of unemployment for women and men has been decreasing over the last few years, but this is due in part to men being laid off rather than more women being hired. Legally, women hold the same rights as men. Socially, however, women are still seen primarily as homemakers, especially in rural areas and among those middle-aged and older. As a visiting businesswoman, you will be treated with courtesy, though not necessarily with the same respect afforded to a man.

There is very little gender segregation in Estonia in regard to the use of space, and women mingle freely among men in the streets, in businesses and public buildings, in taxis, and on public transportation. You are perfectly free to move about in almost any setting either alone or with the companion(s) of your choice. It is usual in Estonia for both men and women to ask each other out on a date, although many Estonian males are a bit shy and reserved around women.

Business people in Estonia dress more formally than many North Americans. For business meetings, don a stylish business suit or dress, but avoid anything flashy. Darker, subdued colors are best.

Estonians have a great respect for personal space, and touch during conversation, other than a firm handshake, is rare. This reticence toward touch is so ingrained in the culture that often simply a nod is given to acknowledge someone’s presence rather than a handshake. In business situations, however, the handshake often prevails.

While in Estonia, feel free to speak to Estonian men as equals. Maintain good eye contact when meeting or greeting men and women, but don’t be surprised if you find people avoiding your eyes when you are out walking in a public area. This is not meant to be rude, but is an extension of the Estonian respect for space and privacy.

Like men, women are expected to have their own opinions and ideas along with the freedom to express them openly. Emotions, on the other hand, are expected to be kept private. In fact, one of the reasons given for why many women are not hired for higher-level positions in companies is because of the accepted stereotype that they tend to be too emotional. Therefore, focus your presentations on the logical and analytical elements of a proposal rather than ones designed to emotionally persuade, as the former is more likely to be effective.

Women have the freedom to travel anywhere they wish within the country or to leave it if they choose. Under the law, they also have the right to own property and set up and manage their own businesses. However, Estonian society is very segregated in the type of business a man or woman is expected to run, as well as in which industry they typically work. For example, women dominate the education sector, not only comprising the majority of the students in the universities but also the majority of teachers on all levels. With this educational background, it’s not surprising that Estonia's women outshine their peers in other countries in their participation in the professional and technical industries. Eighty to ninety percent of the jobs in the health and retail trades are held by women, while the number of women in the financial and hotel industries is high as well. Men, though, dominate most of the industrial and construction trades, in addition to the energy and transport sectors. Despite their educational attainments, women generally earn less than men.

Much of society is still strongly patriarchal, and this orientation filters down into the home and workforce. For example, women are highly visible in offices as secretaries and receptionists, but the real decision-makers on the executive level are usually men. There is also an unspoken expectation that women should defer to a man’s opinion, even when he is wrong. While doing business in Estonia, you may encounter some resistance, especially if you are in an upper-level position or choose to hold your own in a discussion. It may help to acknowledge the positive aspects of others' ideas before introducing your own.