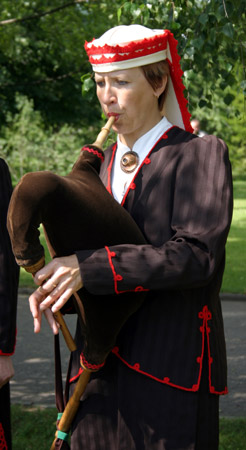 Estonia, a low-lying country of forests and islands on the Baltic Sea, has a long history of invasion and occupation. Prussians, Swedes, Nazis, and Soviets have all taken their turn. In spite of this, Estonia’s native musical traditions survive, and today may be stronger than ever.

After World War II the country became part of the Soviet Union; art and music that didn’t conform to Soviet ideology were suppressed, but folk music and dance were officially supported. When Estonia once again became independent, revitalized folk music played a central role in the recovery of the national identity.

The Setu of Southern Estonia

Estonians speak a non-Indo-European language related closely to Finnish and Hungarian. Though a small country of just 1.3 million people, Estonia encompasses different dialects and several distinct populations. The southern part of the country, the most isolated, is the territory of the Setu people. Their songs, stories, and customs have been orally transmitted for centuries; researchers think that some Setu songs may be 5,000 years old. A tremendous amount of the recorded material in the national folksong archives comes from the Setu. Other minority language groups include Votic, Livonian, and Izhorian.