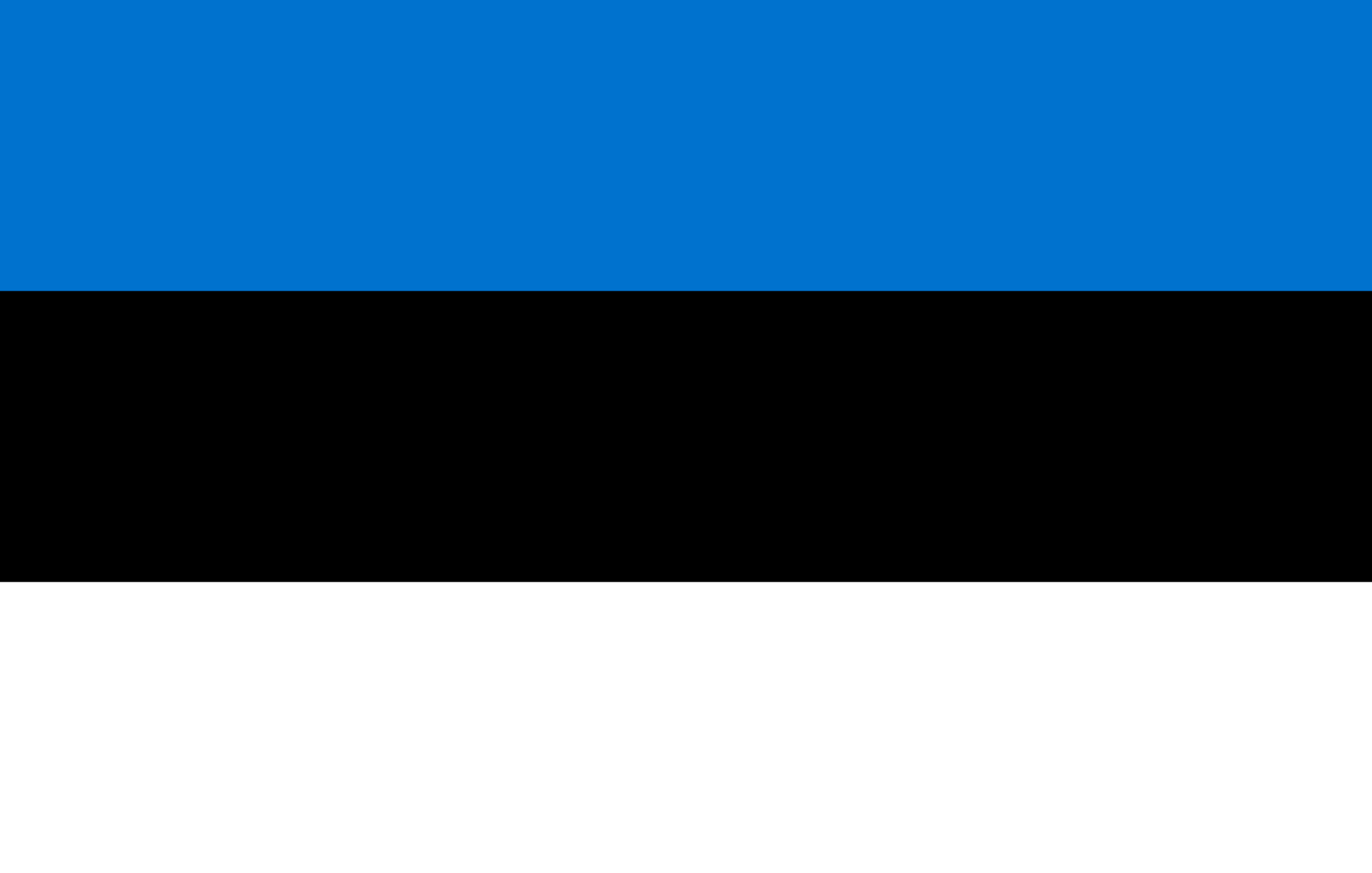 The Estonian flag has three equal horizontal bands of blue, black and white.  The upper band is blue, the middle band black and the lower band is white. The standard measurements of the flag are one meter in length and 1.65 meters (65 inches) in width. This translates to a 7:11 ratio.

Symbols: Symbology in the Estonian flag is mainly expressed in its colors.

Colors: Blue, black and white. The blue in the Estonian flag has 91 units of Cyan and 43 units of magenta, according to CMYK proportions. Blue represents the sky, lakes, and sea. It also signifies the devotion, loyalty, and faith that Estonians have in their country. Black represents the bond between Estonians and their native soil. (Some interpretations maintain that black represents the years of misery Estonians endured under the Soviets.) White represents purity, commitment, hard work and enlightenment.

Variations: Estonia has separate designs for the naval ensign, the presidential flag and the naval jack. The naval ensign is the national flag defaced with the shield in the country's coat of arms and jagged ends on each band. The shield is offset toward the hoist end. The ensign is also used by the country's defense minister. A flag defaced with a complete coat of arms is reserved for presidential use only. The country's naval jack is white with a blue cross placed over a narrow black saltire.  The customs department and the postal service also use the tricolor with varying alterations.

The history of the Estonian flag backs date to the 1880s, when students at the University of Tartu designed a prototype flag as part of their efforts to preserve the Estonian culture. A secret dedication ceremony for the flag was held in June,1884. During the 1905 Russian Revolution, Estonians used the flag to show devotion to their motherland. When Estonia finally received  independence from Russia in 1918, it adopted the student-designed flag. But it was not until 1920 that the flag was officially recognized in the constitution. It was then raised atop the Pikk Herman Tower as a national symbol.

The 1940 Soviet invasion and occupation of Estonia resulted in a ban on the national flag. Accordingly, the flag was lowered from its position on Pikk Herman on June 21, 1940. One day later, it was hoisted next to the Soviets' red flag. Its revival was brief, though:  it was lowered again by the Soviet authorities on July 27, 1940, and replaced with the flag of the Estonian Soviet Socialist Republic (ESSR).

Between 1941 and 1944, Nazi Germany ruled Estonia, and the national flag was not flown. With the German retreat from Tallin in 1944, the tricolor flag was hoisted once more. Again, this was short-lived: the Soviets returned the same month the Germans retreated,  at first hoisting their red flag with the blue-black-white tricolor.  Later, however, the tricolor was declared illegal. The flag remained banned until 1989, when it was again hoisted on Pikk Herman Tower. In 1990, the tricolor was re-declared the national flag

There are no restrictions to displaying the Estonian flag, as long as it is used respectfully.  On the Restoration of Independence Day,  Victory Day and Independence Day, the flag is displayed on all public buildings. The flag is also used daily on government buildings, courthouses, ministry offices, local government offices, state audit offices and the Bank of Estonia. It is also hoisted daily at all Estonian foreign missions, schools and and border crossings. According to Estonian law, the flag should be hoisted not later than 8:00 AM, and should not be lowered later than 10:00 PM. The flag can be used for mourning by flying it at half-mast or attaching a black ribbon to the top of the flagstaff.

Although Estonians are very proud of their flag, some see the tricolor as a symbol of the nation's post-soviet malaise. One such person is politician Kaarel Tarand, who suggested that a flag with a cross design would serve to bond the country to the Nordic nations. (Finland, Sweden and Denmark; Estonians consider themselves Nordic due to the similarity of their culture to that of the Finns. ) When the national flag was adopted in 1919, several Nordic cross designs had been proposed but failed to get much support due to the widespread popularity of the tricolor.