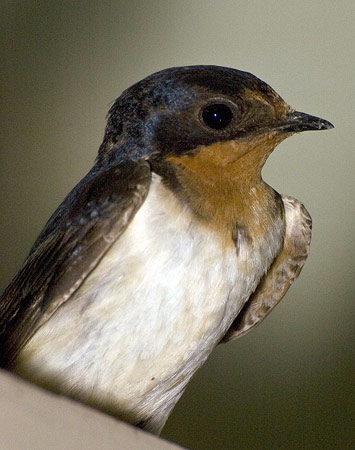 Eggs of the barn swallow

The barn swallow is a common type of small insect-eating bird also known as the European swallow, chimney swallow, or house swallow. It typically lives near fields and bodies of water and is characterized by its silken blue-black coat and long forked tail feathers. Its off-white underbelly is separated from the chin and throat by a broad blue-black breast. The female barn swallow is distinguishable by its lackluster coat, a paler underbelly, and shortened tail feathers. Swallows have only one mate for life; they breed once or twice per year, typically laying five eggs that hatch after 18 weeks of incubation. European swallows are migratory and breed in Eurasia and the northern areas of North Africa. Swallows live in cup-shaped nests of mud and plant fiber—usually lined with feathers—high upon natural structures, including caves and cliffs, or on man-made structures, such as chimneys and barns. They are very territorial and fiercely guard their nests and mates. The swallow communicates with a distinctive high-pitched warble.

To many Northern Europeans, the swallow is a symbol of good luck and also heralds the arrival of warm weather, as the birds are migratory and return from their breeding grounds in the spring. It is the national bird of both Estonia and Austria, and according to an Estonian legend, anyone who kills a swallow will immediately become blind. The human affinity with the swallow can be attributed to the fact that it often lives very close to people, even in the rafters of their homes, and it has an attractive appearance and call. The wide arcs and steep dives of the swallow's flight patterns are also closely associated in literature with a sense of freedom and happiness. In agricultural areas the swallow is also considered beneficial because it feeds voraciously on insects that threaten to destroy livestock and crops. The fact that the birds are agrarian, loyal to their mates, and fierce defenders of their nests probably has much to do with their appeal as national symbols.