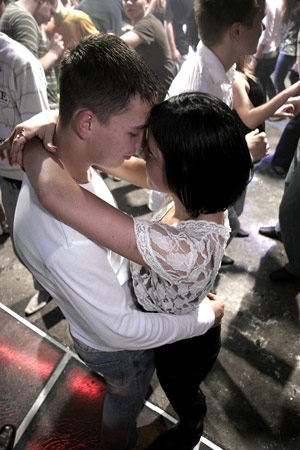 A typical date might include a trip to a cultural event, movie, or dance.

In the past, Estonians practiced a sort of dating tradition called bundling, or ehalkaimine. This practice took place on Thursday and Saturday nights from St. George's Day, April 23, until Michaelmas, September 29. Young women who were considered old enough were allowed to sleep in the family storehouse, while young men could sleep in the hayloft. The boys might visit the girls at night, and this behavior was more or less condoned. Young Estonians often courted at other nighttime gatherings in the summer. For example, mixed groups of young people might tend the herds of livestock at night, and fires intended to scare wolves away were also focal points for the young people’s entertainment.

Today, dating is common practice in Estonia. Young people usually start dating in their mid- to late teens. They commonly meet at schools, workplaces, or social events. A typical date might include a trip to a cultural event, movie, or dance. It’s also common for dating couples to share a meal in a restaurant or at home.

Premarital sex is common in Estonia. Use of contraceptives is less widespread. Dating outside religious and ethnic groups is common, though interracial dating and marriage are not.

Traditional courtship rituals in Estonia are complex, and mainly designed to save a young man embarrassment if the young lady of his choice refuses his marriage proposal. For example, a man might put a birch twig outside the lady’s window. If she brought it in, he could assume that she would accept his proposal. Using a go-between, usually an older woman, was also common. Today, a marriage proposal usually occurs very simply. Two people agree to marry and then let their parents and other relatives know about their plans.